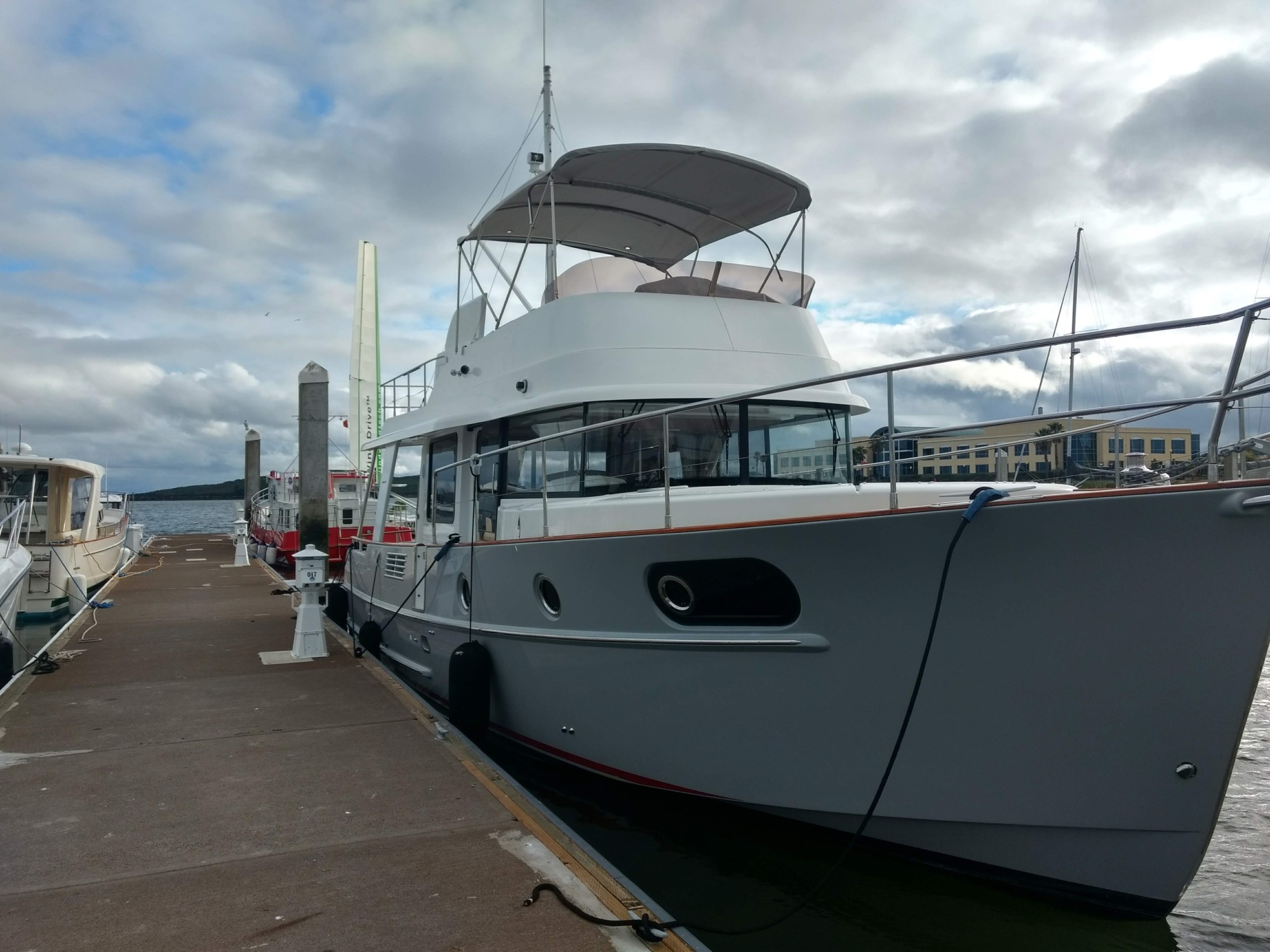 I live on a pretty nice boat. Yes, she is 43 years old and has her warts but she exists as an obvious testament to Ericson craftsmanship and to the many hands through the years that have lovingly cared for her.

This past weekend (April 4-7), my home marina has hosted the 2019 Pacific Sail & Power Boat Show, which among many descriptors might be summarized as a master class in proliferating feelings of inadequacy, jealousy, and avarice.

The official first day of the show was Thursday, but first thing Monday morning a cavalcade of luxury yachts arrived to start taking their moorings all around me. The dock over received a fleet of brand new sailboats, but my lot was cast among the many hundreds-of-thousands and million-dollar power boats on offer, all buffed and shined and hoping to catch some wealthy attendee’s eye. Cynical as I tried to be, these homages to absurd wealth were just flippin gorgeous.

The show featured an array of free (with ticket purchase) talks on a variety of subjects that I imagined would be especially pertinent to my plans, so since the MBYH was kind enough to provide liveaboard tenants with a couple complimentary passes for the show, I decided to pop over for “Cruising Mexico’s Baja Peninsula and the Sea of Cortez” put on by veteren cruisers Phil and Nora McCaleb, followed by “Bluewater Voyaging Preparation” by John & Amanda Neal. When the McCalebs started their talk by expounding the virtues of provisioning treats at Trader Joe’s and of their discovery that you can actually find nice chips and salsa in Mexico I really started to question why I was there, but after reminding myself that the talk was geared towards people of all ages and experience in travel, I took a breath and tried to remain earnest. I’m glad I did. Although the McCalebs and I both might be classified as “Sailing Cruisers” (theoretical, in my case) we obviously aren’t going to go about it in precisely the same ways–and I remind myself that that’s ok. I know going into this adventure that what is motivating me is definitely NOT the opportunity to insinuate myself with the cruising retirees circuit in Mexico, but I can still learn from them, and frankly, appreciate their doddering grandparently charisma. -Plus, just because it is clear that they appreciate creature-comforts doesn’t mean they don’t know sailing a whole helluva lot better than I do.

So what did I learn from these talks? There were some great tips scattered through. Magic Seaweed dot com is great for tracking wind/swell. When refueling, fill a known-quantity container first to corroborate the volumeter on the pump is accurate. Cheap fishing charts can be excellent resources for anchoring decisions in the Sea of Cortez….I dunno, man. There were nuggets, but in general I suppose it was mostly valuable for me to be around the many other eager attendees, all of whom (like me) felt that they needed to learn more before enacting their dream of cruising Baja. When it comes right down to it, I’m much less off-put by the prospect of things going wrong than I am by the idea that I don’t belong. Sailing is mostly intimidating to me because it is uncomfortable to be so demonstrably less experienced than those around me. And I recognize that I’m bringing to the party most of those self-conscious doubts–with only a few notable exceptions the sailors I have had occasion to rub elbows with have been patient, gracious people who are eager to both listen and share. In spite of that awareness, however, those doubts are pernicious so I appreciated the practical demonstration of just how many peers I have who also feel like they still have things to learn.

What other takeaways did I have from the show? Leaving aside my disappointment at the absolutely worthless seminar on Anchoring Techniques (sorry, Norm, but a rapid recitation of power-point titles and finishing an hour-long segment in 25 minutes doesn’t qualify as the zenith of education) I feel much like I did before the show: overwhelmed by having to choose how to equip my cruising boat. The fine lines demarcating the complex Venn diagram of safety and comfort and prudence and recklessness can be difficult to parse. Some projects are obvious in their necessity. I’m redoing my ground tackle (anchors, chain, windlass) because I’m going to be living on the hook. This system is literally my life line. Do I need Radar and a GPS? Sure, but how about multiple GPS systems, AIS transceiver, Iridium Sat Phone (w/ subscription), autopilot, Life Raft, Dinghy (with davits and outboard engine), Drogue Anchor, commercial grade sewing machine, extra alternator, etcetera, etcetera. Simple back-of-the-envelope math cost estimation for all this comes in at…yep. A whole lotta mangoes.

Every talk begins with the mandate: Just go cruising now. Don’t wait! And then the laundry list of “necessities” begins. In a vacuum each of the so-called must-haves make sense. Taken all together, however, it sure seems like an impediment to ever casting off the dock lines. So, even as I happily accept the need to pour money into my boat in preparation for this voyage, I’m also spending a lot of time trying to differentiate increased comfort with increased safety, and along the way hopefully stem this message to consume, consume, consume as an effectively non-nonsensical method of preparing to simplify my life.